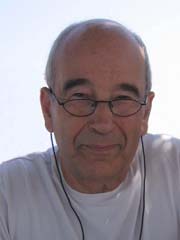 Josef Bar-Pereg
wie würden sie jemand anderem ihren job erklären?
As a designer/ergonomist I study the relationship between men and man-made tangible and intangible artifacts for the purpose of enhancing the design, the use and/or the production of those artifacts using a variety of scientific disciplines.

wann und warum wurden sie ans id4 berufen?
I was part-time guest lecturer firstly invited in 1989 not by the UdK but by Nick Roericht personally. Why? The best is to ask Nick, my feeling is that he wanted a to expose his students to a complete different approach and ideas.

hatten sie zuvor schon kontakt zu designern?
Yes, I studied design at the Ulm HfG and the London RCA, I taught at a design college and worked with designers.

was fällt ihnen zu den umständen und der zeit am id4 spontan ein?
Great students, eager to learn, professor jealousy. What I found at the HdK, compared to other colleges, is academic freedom. There was no policy dictated from above like in England where colleges are more school-like. Another important difference was that students have the freedom to choose their professor. They came to Nick, not because they were obliged to follow his classes, they went to him out of choice because they wanted Nick’s supervision, to learn from him.

welche aufgaben haben sie dort übernommen?
Only teaching duties; short lectures plus setting up and supervision of ergonomic related student projects. The first project was about the human hand, redesigning/constructing a thumb index finger combination, another project was "walking machines", than "flying to the moon" or how to fold a space sail of a million square meter into a small package and unfold it in space. One of my last projects in 1998 was about the problems visually handicaped people incur when getting dressed in the morning. To device an information system that enables them to combine the appropriate colours, materials and styles when getting dressed.

besonderheiten der studenten-generation, mit der sie zu tun hatten?
In general I found Nick's students quite adult and independant compared to students in other colleges. I would like students to be more critical about their professors and express their criticism in writing.

übereinstimungen / inspirationen / reibungen an nick roerichts positionen?
I deliberately tried not to analyze Nick's methods; I looked at the results of his efforts, his students. It is obvious that Nick inspires, his students - look at the number of his former pupils who have become professors - and not only his students. I personally have also felt inspired after visiting, working for and with Nick and his students. Of course there have been clashed between Nick's and my ideas, I learned from it and hope Nick as well. I have found Nick more an empiricist while I myself am more a deductionist and a science freak.

kontakt / zusammenarbeit mit damaligen mitmachern und id4lern?
Some five or six years ago I had contact with two former Nick students. Furthermore I only have contact with Nick.

was würden sie im nachhinein, angenommen die zeitreise wäre bei gleicher ausgangslage möglich, anders machen?
Nothing really, but I would have tried to get more time to do the same.

haben sie etwas in ihren arbeitsbereich übernommen oder dort weiterentwickelt?
O yes, I developed Nicks idea of "learning through experience" into various rather successful projects that have received recognition from the Wellcome Foundation at their first Sciart competition. I refer here to Nick’s handle project. Nick asked students design handles for the purpose of puling, and pushing, moving up or down, left or right etc. I on the other hand asked students to redesign and construct the human hand to fulfill those movement functions. I worked in anatomical and biomechanical research. While working as research assistant I followed part of the medical course. Nick’s "learning through experience" idea was my inspiration to develop an interdisciplinary programme for medical, engineering and design students. I have repeated the idea in projects as guest educator at various other colleges.

sehen sie die disziplin design mittlerweile übergehen, mutieren, sich entwickeln in andere formen und ausrichtungen?
Design is not a new discipline, it is older than science, although the word "design" is rather new. Like all disciplines that involve the manipulation of and cooperation with our environment design is also going through a Darwinian evolution. Not only will design change, it has to change in order to survive or it will be taken over by other disciplines. The latter already happens.

welche hoffnungen knüpfen sie daran?
Institutions of design education must be able to look at their programmes. They need to look at least ten years into the future, predict the future, adapt to the needs of the future and recruit morally and naturally intelligent and adaptable pupils.